that are broken out of the open hand forms. The attacking partner throws a punch or executes a grab or hold.  The defending partner practices the set as a means to learn how to counter the attack. We practice with control and the proper respect for each other and for what we are trying to learn.

Practicing self-defense in this manner develops a number of important aspects that set oneself apart as a martial artist.

First, using accuracy when blocking and targeting striking areas. It is important when defending oneself to use the most effective counter with the least amount of effort.

Secondly, the student starts to become comfortable with having someone in their personal comfort zone. By developing this comfort, the martial artist can respond to a breach of his personal space without panic and fear, but with a calm, focused and strong mind.

Thirdly, the student gradually learns the biomechanics of applying the same type of techniques against different sizes, limb lengths, energies and intensities.

As with other aspects of the HealthKick program, the Self-Defense sets start simple and build in intensity and complication when the student is comfortable and ready.

Shaolin Quanxi (Fighting) routines have hundreds of units starting with open hand forms and working in an orderly manner through dozens of weapons. There are striking and joint locking techniques, sweeping and grappling, acupressure applications and unique qigong exercises. All of these categories contain exercises in which the contents consist of different types and various degrees of difficulty. They are all arranged in an organic and orderly large technical curriculum. 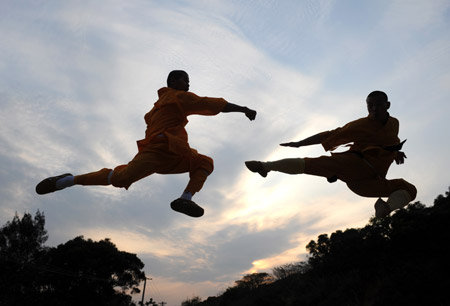 Many of these studies take into consideration static and dynamic movement, the principles of yin and yang, relaxation, hard and soft movements. The most famous of these studies is the principle of Liu He or the six directions: north, south, east, west, up and down which also correlates to hands and feet together, elbows and knees together, shoulders and hips together along with the combination of heart and mind.

The study of human movement also led to the understanding of man’s ability to develop and harness qi through practical exercises and the use of the mind to develop strength and vitality. Qi development also finds its roots in ancient Chinese wisdom, in the belief of the harmony between man and nature. By adhering to that belief, Shaolin Kung Fu developed by rational thought about what is the best and most reasonable structure for the body’s natural movement.

Studying What Works &  What Doesn’t

In the long history of Shaolin Kung Fu, one will always find that after examination, this martial arts system eliminates what is useless and constantly refines its innovation and development to make the human body the best at maximizing its ability to defend itself within the most optimal form of human motion.