Is a form of Chinese “free fighting” 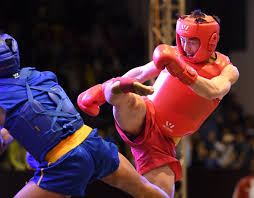 Sanda is a standardized method of using the physical conditioning and abilities developed by Kung Fu forms in an environment that mimics natural body movement and real responses.

There are three components to the training: 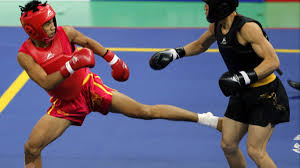 In recent times, the Chinese government endorsed training athletes for combat sport competition. In order to have Sanda evolve into a non-violent sport, certain safety guidelines were introduced. These include the wearing of protective safety gear, no blows to the back of the head, spine or groin and stopping a match when an opponent goes down to the mat.

We practice Sanda at least once a week, sometimes more. For the student interested in competitive martial arts, it gives them an avenue to develop the proper instincts and timing to be effective in the ring. If the student is more focused on practical self-defense, it develops the understanding of the type of force needed to stop an attack. For people practicing Kung Fu strictly for health and fitness, it is a great cardio workout and trains fast reflex timing.

At HealthKick we practice with safety in mind since most of our students do Kung Fu for recreation and not for serious ring competition.

Learning how to strike with power and learning how to take a blow is developed first with bag and focus pad/shield training. Sweeps and throws are introduced when the student is first taught how to fall safely and without the fear of hitting the mat. Response times are first developed with the practice of set timing drills.

Once a student is comfortable and willing, freestyle sparring with protective gear is introduced. Participation is elective and students do not have to freestyle contact fight to participate in our program.